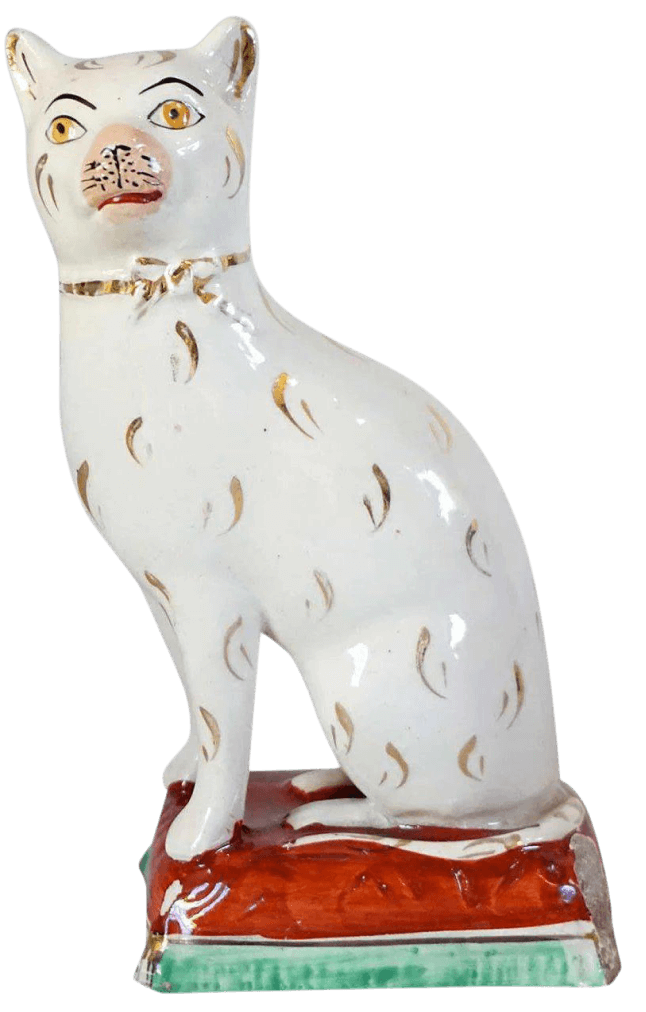 Staffordshire figures are a type of popular pottery figurine made in England from the 18th century onward. Most Staffordshire figures made from 1740 to 1900 were produced by small potteries and makers' marks are generally absent.
Most Victorian figures (1837 to 1900) were designed to stand on a shelf or mantlepiece and are therefore only modelled and decorated where visible from the front and sides. These are known as 'flatbacks'.
Figures were mainly made in Staffordshire but also in other counties and Scotland
Mid 19th Century, Dog With Pups
Price: $245
Popular pottery figurine
dogs&more 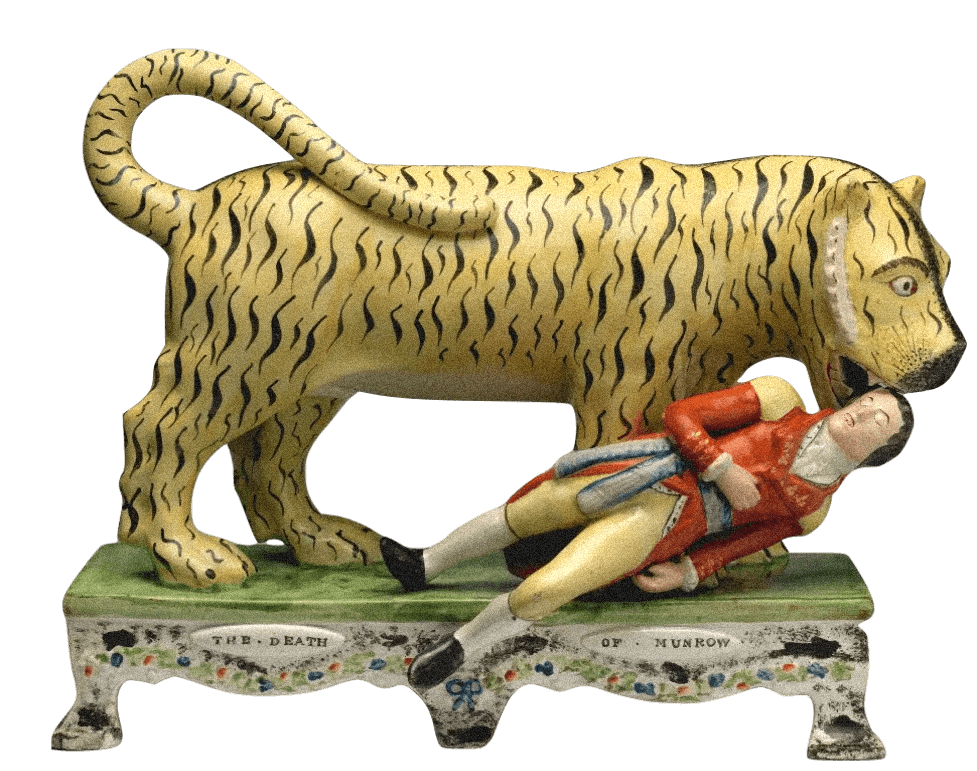 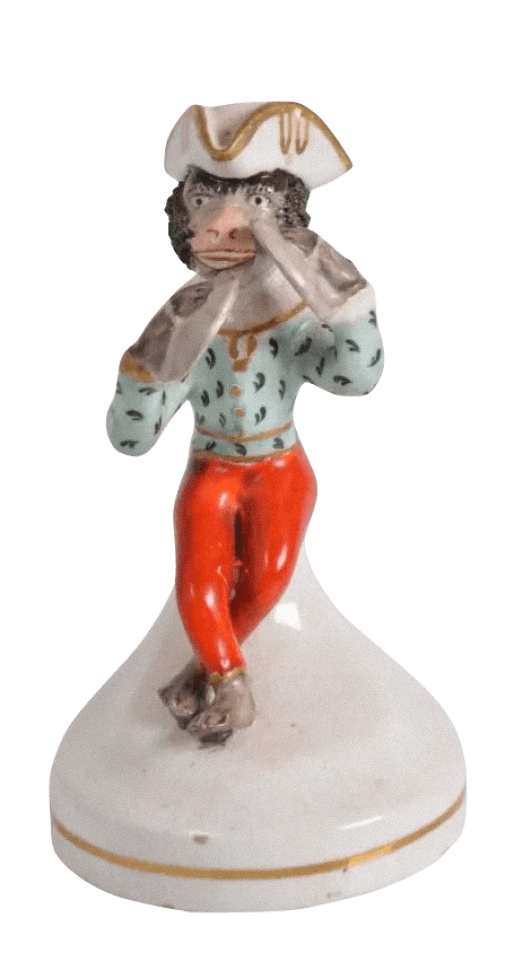 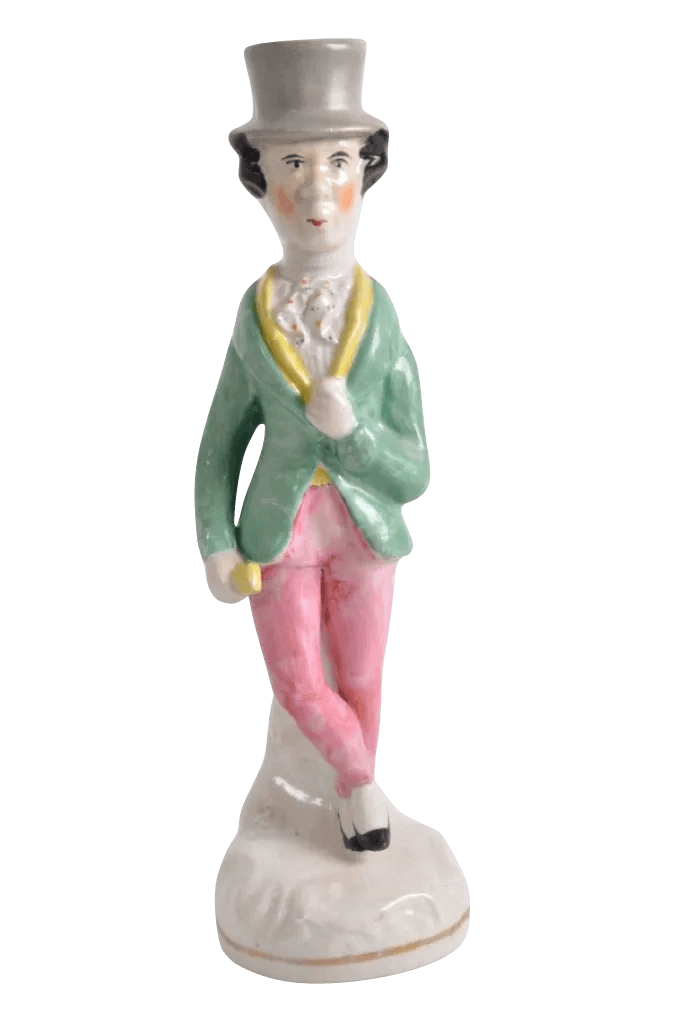 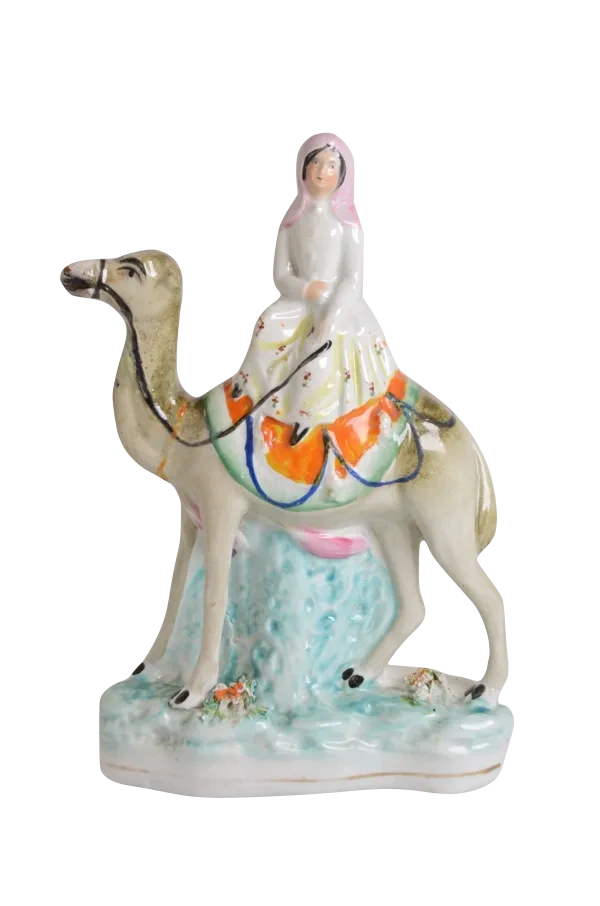 A Woman Riding a Camel
Price: sold
The rarest figures, mostly early ones, can sometimes fetch prices into six figures. A pew group of c. 1745 sold for $ 168,000 at a Christie’s auction in 2006, and in 1987 Sotheby’s sold one for $ 179,520
Of the huge variety of figures produced, the Staffordshire dog figurine was the most ubiquitous, especially as a pair of King Charles Spaniels for a mantelpiece. Once cheap, Staffordshire figures are extensively collected in the English-speaking world, and modern imitations and forgeries abound. 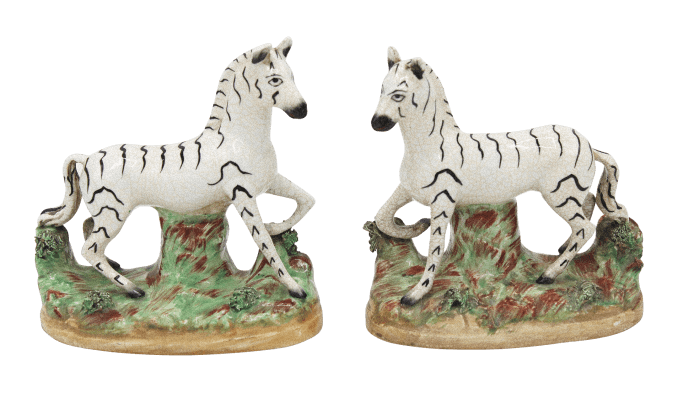 Pair of Porcelain Lions
Price: $950
Сollecting figurines
The largest figures, from about 1780 to 1810, can be 20 inches tall, and the smallest as little as 2 inches. They have been keenly collected over the past century, although even the late mass-market figures are now expensive, and there is a considerable literature devoted to them.
The figures vary considerably in size: around five to seven inches tall is the most typical for a standing figure, though equestrian figures and bocage groups often reach ten inches.
Circa 1740–1780 Early figures

Staffordshire dog figurines are matching pairs of pottery spaniel dogs, standing guard, which were habitually placed on mantelpieces in 19th-century homes.
Spaniel dogs
Many other breeds were produced, particularly the greyhound, though the spaniels were especially popular and this is attributed to royalty favouring the King Charles Spaniel breed.
No mantelpiece was complete without a pair of spaniels standing guard
The spaniels come in sizes from a little over a foot to a few inches high. They were all decorated by hand, that is why all the figurines are different.
Staffordshire Dogs With Girls, 19th Century
Price: $650
Spaniels - a Pair
Price: sold 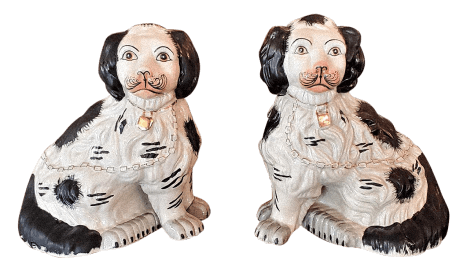 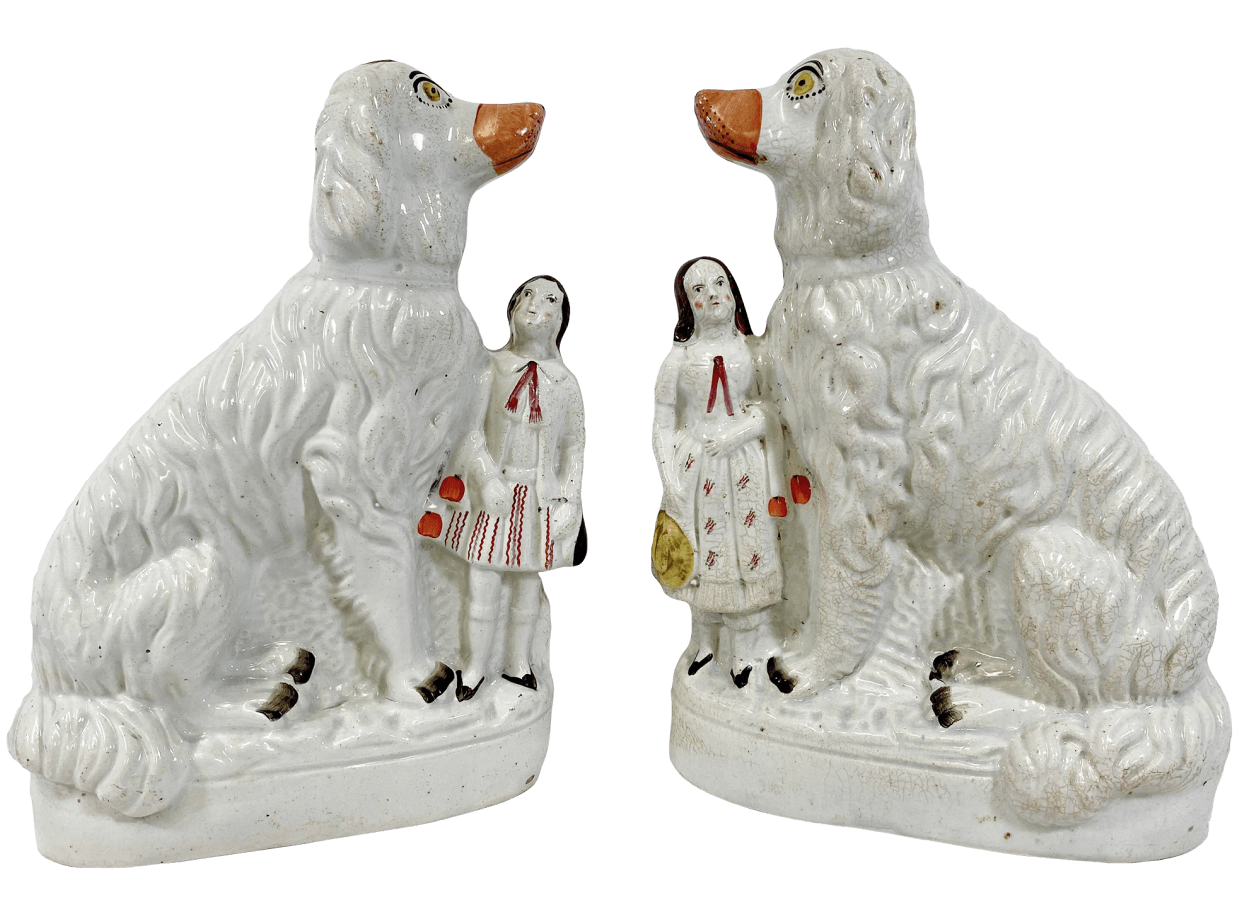 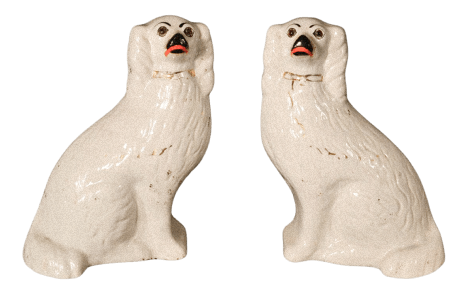 The Staffordshire mantel dog’s expression can be soft or fierce, deplorable or self-satisfied, inquisitive or pleased. The base coat is layered over with polka dots or brushed patches of rust, copper luster, or black.
Disraeli spaniels feature painted curls on their foreheads; Jackson spaniels are entirely black. Some have glass eyes, some painted. The most frequent model features front legs moulded to the body; rarer models have one or two distinct front legs.
pets were another favourite
Children as young as seven or eight years were paid two shillings a week to paint the gold chains often included on the spaniels in the 1800s
Dogs Greyhound
Price: $64 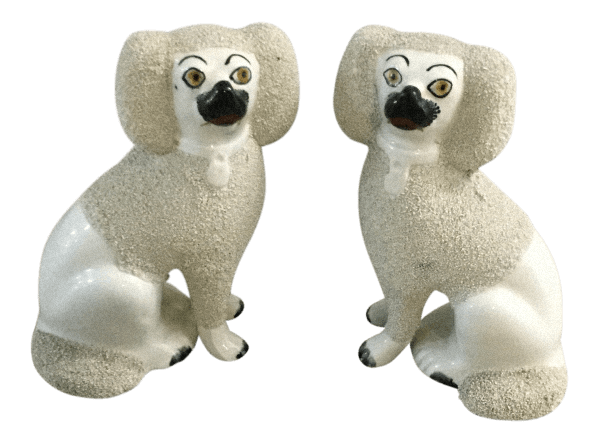 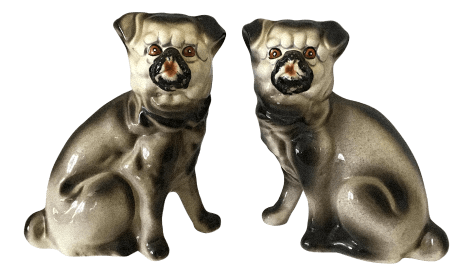 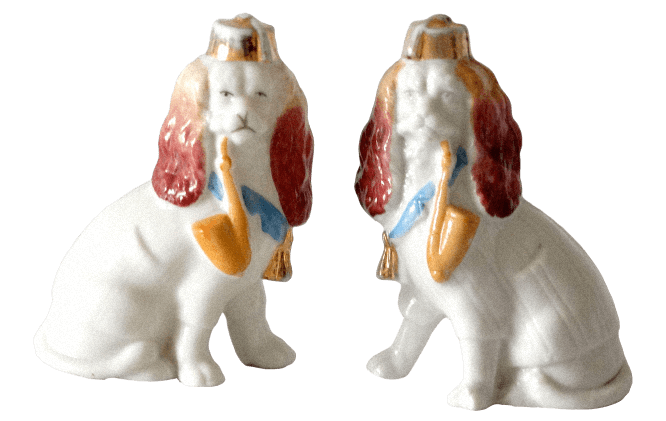 Price: sold
There are various tales said to portray the usefulness of placing the Staffordshire spaniel figurines on window sills. One story is that a woman could place the ornaments in her front window; if the spaniels were turned back to back, it meant her husband was at home.
If he was away or at sea, the dogs would be placed facing each other. When her lover passed the house, he would then know by the way the dogs were facing, whether it was safe for him to visit her without her husband knowing.
Legends 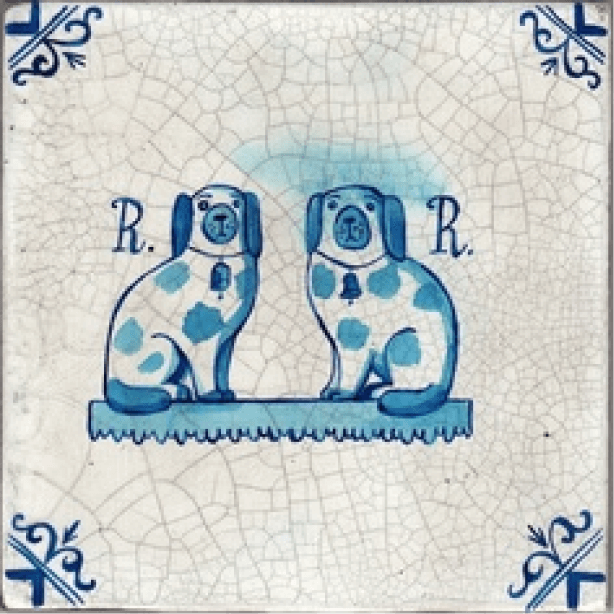 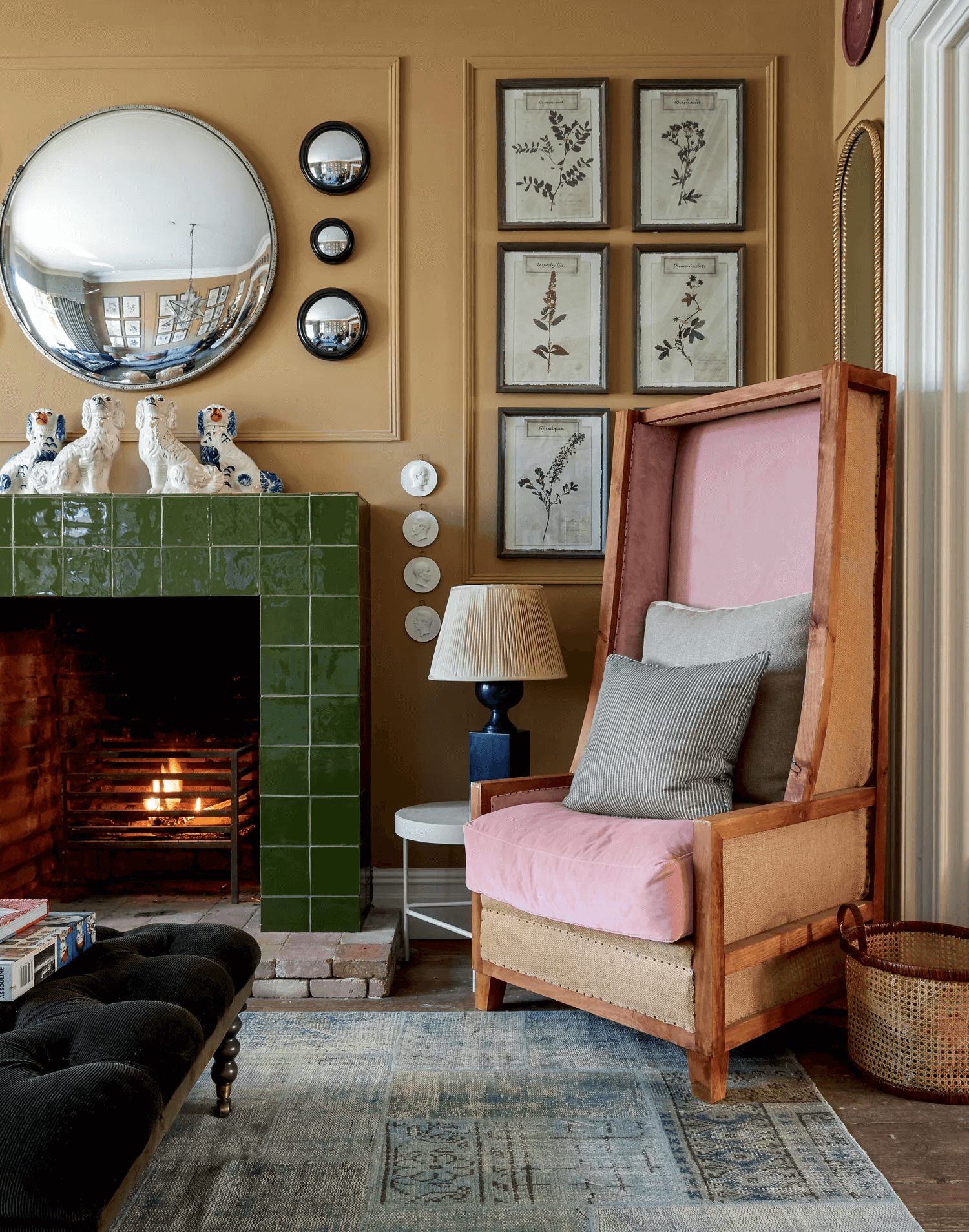 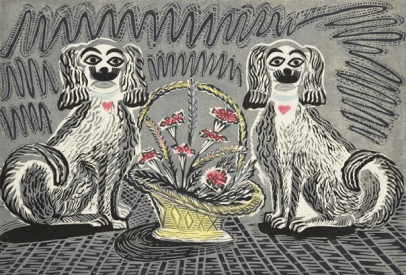 Portrait figures of the era
Like many collectable ceramics, fake Staffordshire figures come regularly into Britain. If you want to invest wisely, then buying from a reputable dealer 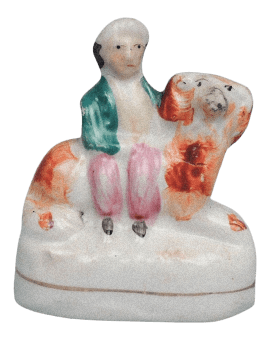 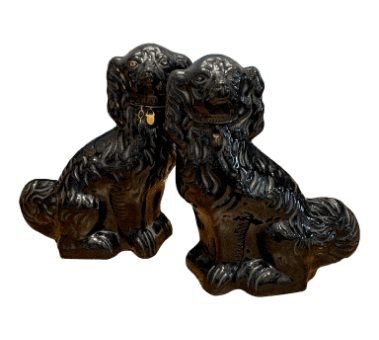 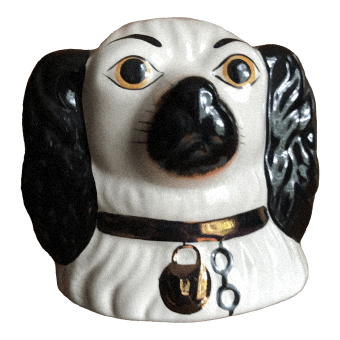 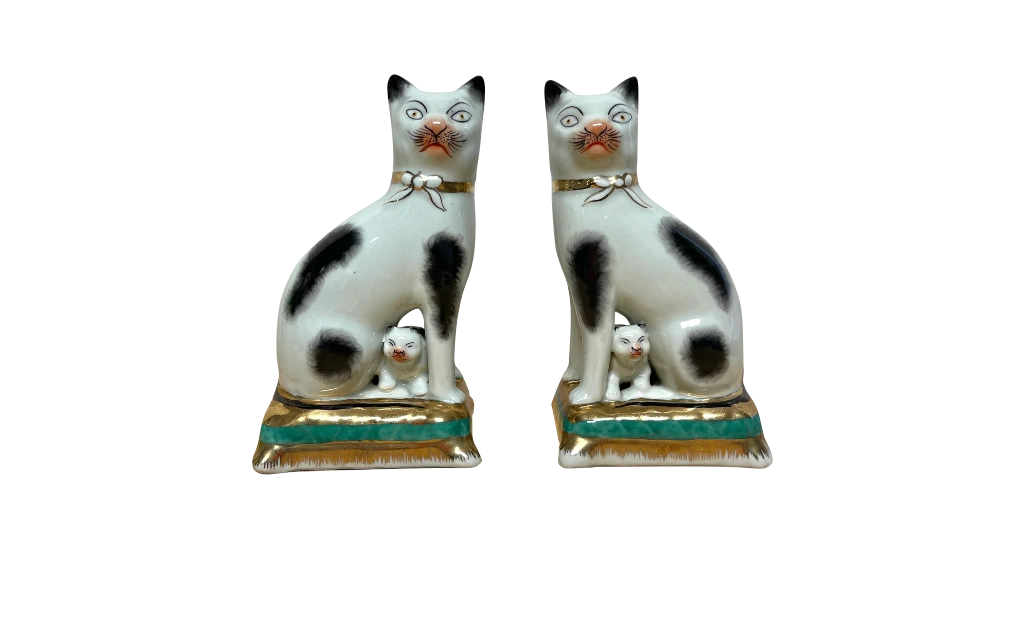 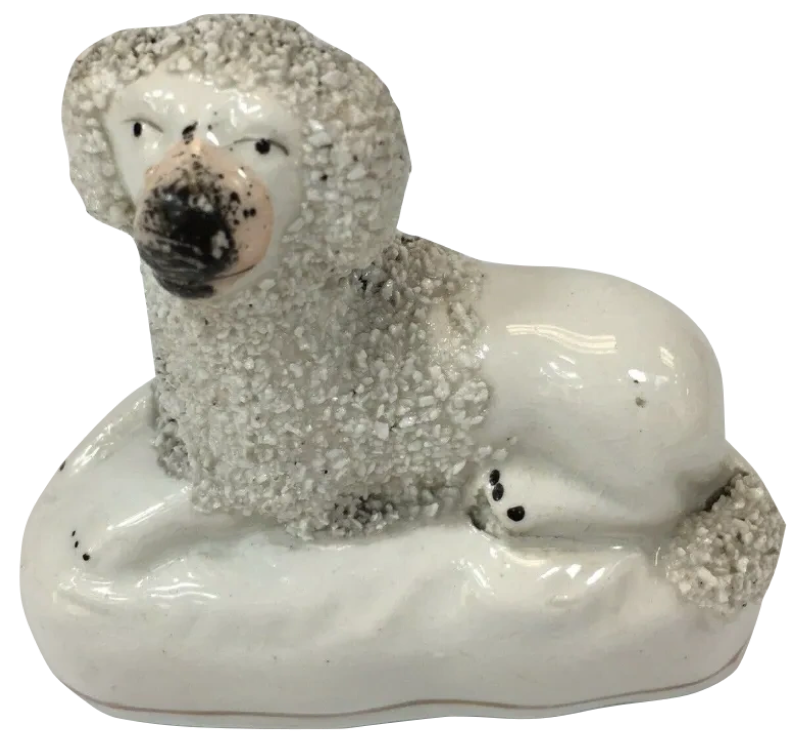 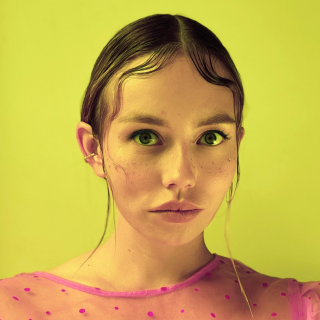